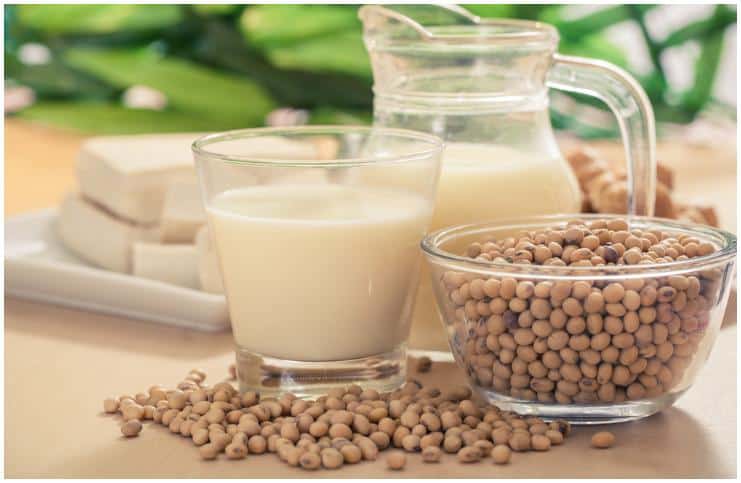 Soy milk is a plant milk produced by soaking dried soybeans and grinding them with water. It is found in many vegetarian and vegan food products and can be used as a replacement for cow’s milk in many recipes.

It is a good source of calcium (when fortified), protein, B12, and potassium. Tofu is produced from soy milk by further steps of curdling and then draining.

Soybeans originated in China, probably during the early Han dynasty, after the rotary millstone was introduced and became broadly used to grind wheat.

It did not become widely used in China until the 1800s when it was discovered that extended heating made it easier to digest and taste better. In the present day, China consumes more than 80% of soybeans produced worldwide.

The taste of soy milk differs considerably from that of cow’s milk. Depending on the manufacturer, its taste has been described to be similar to vegetables (beans), chalk, oats, or rice.

Important note – it is mandatory to heat all soybean protein products to destroy the activity of the protease inhibitors naturally present in the raw soybean.

Soy milk can be made from whole soybeans or full-fat soy flour. The dry beans are soaked in water overnight or for at least three hours or more depending on the temperature of the water. The rehydrated beans then undergo wet grinding with water to give the desired solids content to the final product. 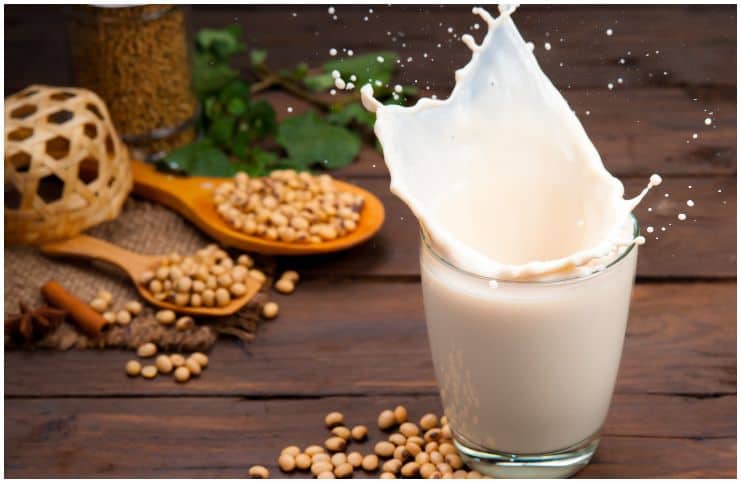 The ratio of water to beans on a weight basis should be about 10:1. The resulting slurry or purée is brought to a boil in order to improve its nutritional value by heat inactivating soybean trypsin inhibitor, improve its flavor and to sterilize the product.

Heating at or near the boiling point is continued for a period of time, 15–20 minutes, followed by the removal of an insoluble residue by filtration.

Unopened, aseptically packaged soy milk can be stored at room temperature for a few months. Once it is opened, the milk must be refrigerated. It will stay fresh for about five days. Soymilk powder should be stored in the refrigerator or freezer. 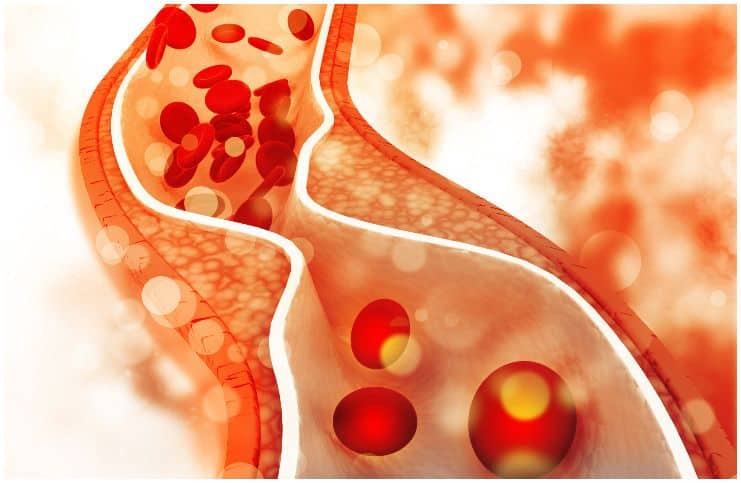 Unlike dairy milk, which is high in cholesterol and saturated fat, soy milk fat is mostly unsaturated with zero cholesterol (dairy milk contains about 20 milligrams of cholesterol per cup).

The polyunsaturated and monounsaturated fatty acids in soy can inhibit the transport of cholesterol into your bloodstream. Studies concluded that soy protein is an effective strategy to lower LDL, leading the FDA to approve a health claim for soy protein at a dose of 25 grams/day. (1) This combined effect makes this milk an ideal drink if you have high cholesterol or have a family history of coronary heart diseases.

A rich source of phytoestrogens (isoflavones) 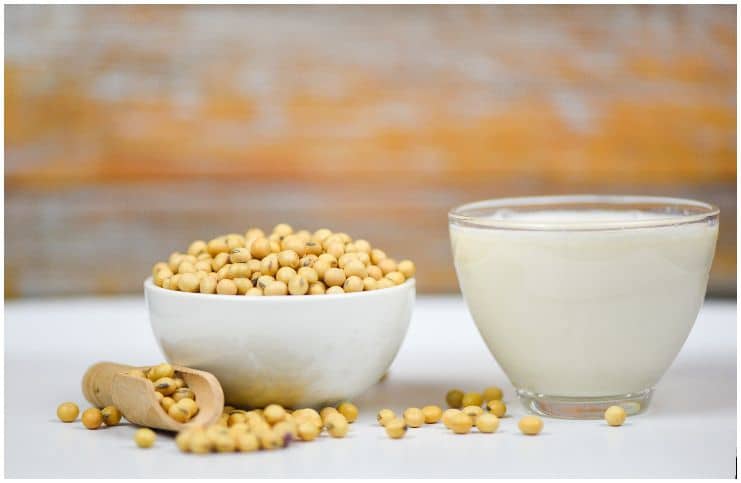 Phytoestrogens represent a family of plant compounds that have been shown to have both antiestrogenic and estrogenic properties.

Many of the potential health benefits of phytoestrogens may be attributable to metabolic properties that do not involve estrogen receptors, such as their influence on protein synthesis, easing of menopause symptoms, calcium transport, cell proliferation, angiogenesis, Na+/K+ adenosine triphosphatase, growth factor action, vascular smooth muscle cells, prevention of osteoporosis and reduction of risk for certain cancers (breast cancer and prostate cancer), lipid oxidation, and cell differentiation.

Unlike most plant-based proteins, which contain some, but not all, of the amino acids you need in your diet, soybean contains all the 9 essential amino acids (one cup contains about seven to ten grams of protein).

Your body assembles these amino acids into new proteins, including antibodies vital for immune system function, structural proteins that hold your tissues together, and enzymes that help your cells produce energy.

About 75% of the world population cannot tolerate lactose (the sugar found in milk). Some ethnic groups are more affected than others. For instance, 90% of Asians and 75% of Africans have lactose intolerance.

Benefits for skin and hair

It is a storehouse of complete protein, calcium, iron, dietary fiber, folate (also known as vitamin B9), and potassium that all work in synergy to repair the split ends of your hair.

Furthermore, all the above nutrients and may other phytonutrients which contain this product keep your skin moisturized for one long time, plus, it makes it soft to touch.

Side effects of Soy Milk 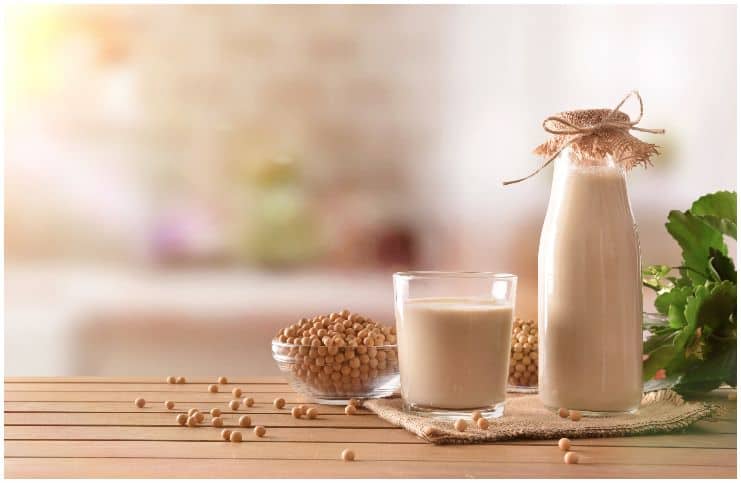 Soybean contains high levels of phytic acid, a substance that reduces the absorption of minerals like magnesium, calcium, and zinc. In addition, it contains enzyme inhibitors, making it harder for your body to absorb protein. These type of substances can give you cramps, abdominal pain, gas, nausea, and other gastrointestinal problems.

The US Department of Agriculture reports that 90 percent of soy grown in the United States is genetically modified to be resistant to Monsanto’s herbicide RoundUp. Glyphosate, usually sold under the brand name Roundup, is probably the second most widely used U.S. lawn and garden weed killer.

Many studies found glyphosate in farmworkers’ urine and blood, increased risks of non-Hodgkin lymphoma, chromosomal damage in cells, and tumor formation in some animal studies.