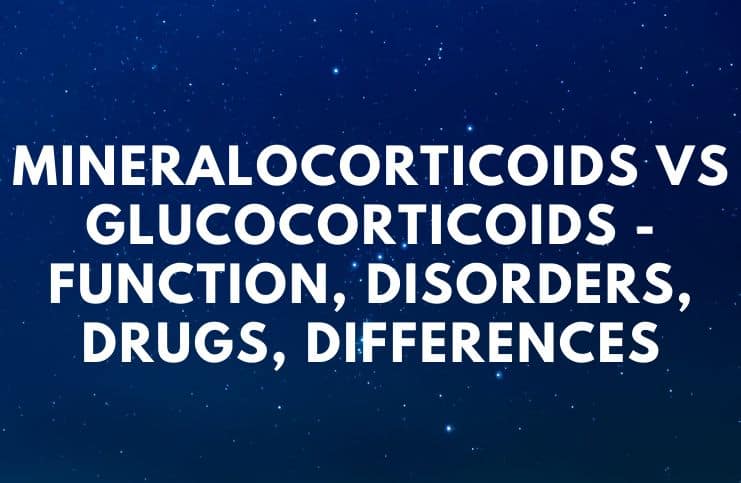 They are produced in the adrenal cortex. The adrenals are two small glands which look like mushroom caps. These glands weigh only 1.5-2.5 grams and are 1-2 inches long. One adrenal gland sits above each kidney.

For instance, they influence salt and water balances (fluid balance and electrolyte balance) by acting on the minerals, especially potassium and sodium. They mainly act on the kidney, where they cause active excretion of protons and potassium, and water and sodium retention.

The principal mineralocorticoid is aldosterone, that accounts for most of the activities of this group of hormones. Aldosterone is produced from the precursor corticosterone by the zona glomerulosa of the adrenal cortex in response to angiotensin II. However, recent studies concluded that tissues other than adrenal cortex may also be capable of biosynthesis of this hormone, like – the central nervous and the cardiovascular systems.

Aldosterone plays a crucial role in the regulation of electrolyte and fluid balance in the salivary glands, kidney, large intestine, and sweat glands.

Moreover, they may mediate the effects of extracellular fluid volume on distal nephron acidification and are an essential determinant of net acid excretion by the kidneys.

Disorders of either mineralocorticoid function or production can lead to severe alterations in the potassium, sodium, and water content of the human body.

Elevated levels of aldosterone associated with long-term stimulation of the Renin-Angiotensin-Aldosterone-System is involved in the development of hypertension, hypervolemia, and hypokalemia. In contrast, without sufficient levels of mineralocorticoids, a reduced cardiac output can result in hyperkalemia, hyponatremia, hypotension, dehydration, death, and cardiac arrest. Mineralocorticoid replacement is needed only in primary adrenal insufficiency.

In adrenal insufficiency, it is typically taken together with hydrocortisone, a synthetic hormone which is part of a class of drugs called steroids, that work by activating natural substances in the skin to reduce redness, swelling, and itching.

They are hormones which are produced by the adrenal gland. They regulate the metabolism of proteins, carbohydrates, and fats. The release of glucocorticoids from the adrenal cortex is initially triggered by corticotropin-releasing hormone elaborated by the hypothalamus (a region of the brain composed of many small nuclei with a variety of functions).

The vast majority of glucocorticoid activity is from cortisol, also known as hydrocortisone.

In case of excessive bleeding, they constrict blood vessels to offset the drop in blood pressure due to blood loss. They also increase the blood-glucose (sugar) level by converting fats and proteins into carbohydrates, that in turn is converted to glucose (sugar).

The name “glucocorticoid” derives from early studies showing that this type of hormones was involved in glucose metabolism. During times when no food is consumed, they stimulate a few processes which serve to maintain and increase glucose concentrations in the blood.

Glucocorticoid drugs are synthetic versions of glucocorticoids, hormones which occur naturally in the human body. Their power to induce lymphocyte apoptosis combined with the potent immunosuppressive and anti-inflammatory activity places these drugs among the most frequently prescribed medicines worldwide.

Examples of these medicines include:

In people with Duchenne muscular dystrophy (a genetic condition described by progressive muscle weakness and degeneration), treatment with these drugs is associated with considerably reduced risk of losing clinically meaningful mobility as well as reduced risk of death.

In addition, as anti-inflammatory agents, they are commonly used in the treatment of bronchial asthma, an inflammatory disease of the airways which causes periodic attacks of wheezing, coughing, chest tightness, and shortness of breath.

SEE ALSO:  Eligard vs Lupron - Comparison of Side Effects & Uses

Note – according to a recent study which was issued in AJP, the use of these drugs in the treatment of infections of the lower respiratory tract and chronic obstructive pulmonary disease is linked with an increased risk of neuropsychiatric disorders and suicidal behavior.

Mineralocorticoids are a group of hormones (the most important being aldosterone) which regulate the balance of electrolytes (ions such as potassium and sodium) and water in the human body. Without sufficient supply of these hormones, fatal shock from diminished cardiac output can occur very quickly.

The main glucocorticoid hormone is called cortisol and plays an essential role in the regulation of primary body functions.

In conclusion, mineralocorticoids and glucocorticoids are steroid hormones that are secreted exclusively by the adrenal glands. They produce effects by docking with receptors on the cell’s membrane surface.

Mineralocorticoids control water and electrolyte balance in the body. They do not have any negative impact on the body. The loss of glucocorticoid secretion leads to an inability to deal with stressors, that is fatal.

On the other hand, the chief task for glucocorticoids is to control the fats, carbohydrates, and other proteins within the body. They also have potent anti-allergic and anti-inflammatory effects. The failure to produce these hormones is not acutely life-threatening.