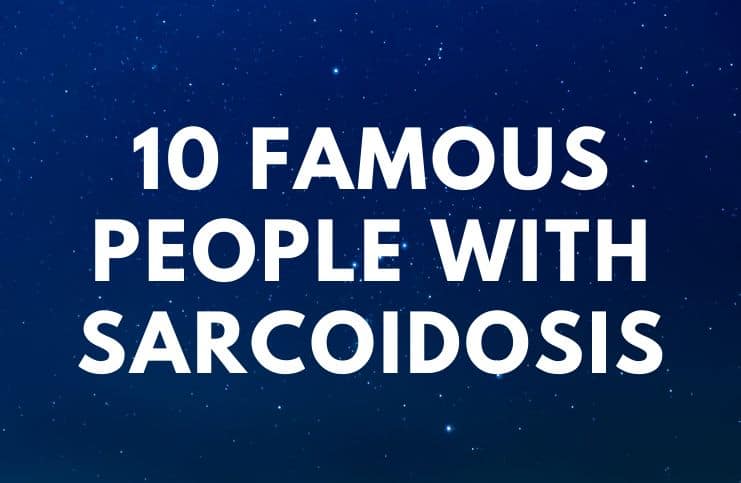 Sarcoidosis is an inflammatory disease in which granulomas form in various organs, most commonly the lungs, eyes, lymph nodes, and skin. These granulomas may change the normal structure and function of the affected organ.

An estimated 15 in 100,000 people in the United States develop sarcoidosis every year. The disease occurs at all ages and affects people of all racial and ethnic groups.

In the US, it is most common in people of European “particularly Scandinavian” descent and African Americans.

Common symptoms of sarcoidosis include:

Researchers believe that sarcoidosis is caused by an abnormal immune response. Additionally, an individual with a close blood relative who has the disease is nearly five times as likely to develop sarcoidosis.

Many patients recover completely without medical treatment. When is needed, symptoms can be managed with medication. A steroid medication, like – cortisone or prednisolone, is the most common therapy.

Here Is A List Of 10 Famous People With Sarcoidosis:

He is an American retired professional basketball player who is a twelve-time All-Star NBA and a five-time NBA Most Valuable Player. From 1956 to 1969, Bill played center in the National Basketball Association (NBA) for the Boston Celtics.

In 1969, Russell retired and was inducted into the Naismith Memorial Basketball Hall of Fame 6 years later. He was diagnosed with sarcoidosis.

He is an American former professional basketball player. In 2001, he was diagnosed with sarcoidosis. The cause of Ray’s sarcoidosis is unknown and it took the doctors several years to correctly make the diagnosis. In 2008, Ray received a lung transplant.

He is a Canadian musician who was the lead singer for the Matthew Good Band, a successful band in Canada during the 1990s. Good was also credited with coining the popular internet phrase ”First World Problems.”

In 2012, Matthew Good said – ”For the last 13 years I have suffered from a disease called Sarcoidosis… Unfortunately, because I am bipolar, and take medication for that, when I am placed on oral prednisone it results in extreme mania.”

He was an American actor, comedian, and voice actor who is best known for his appearance in the “Ocean’s 11” films and “Bernie Mac Show.”

In the final 3 years of his life, Bernie publicly disclosed that he had suffered from sarcoidosis. He died in 2008. His public funeral was held a week after his death at the House of Hope Church with over 6,000 people in attendance.

He was a professional American football player who played defensive end in the NFL (National Football League). In his 15-year NFL career, Reggie White was selected to the Pro Bowl 13 consecutive times.

On December 26, 2004, White died due to complications from sarcoidosis which he had lived with for years. His jersey, #92, was retired by the Philadelphia Eagles and Green Bay Packers.

Mahalia Jackson, better known as the Queen of Gospel, was an American gospel singer who is revered as one of the greatest musical figures in United States history.

In 1963, Mahalia Jackson sang the old African American spiritual “I Been ’Buked and I Been Scorned” just before Martin Luther King, Jr. delivered his famous “I Have a Dream” speech.

On January 27, 1971, Jackson died in Chicago due to complications from a nearly lifelong struggle with sarcoidosis.

During his career, Evander had notable victories over:

In 1994, Evander Holyfield was diagnosed with sarcoidosis.

In 2010, Marable had undergone a double lung transplant. Manning Marable died on April 1, 2011, due to complications from sarcoidosis.

Before his death, Manning had completed a biography of Malcolm X (an American Muslim human rights activist) titled Malcolm X: A Life of Reinvention.

She is an American producer, recording artist, and actress who has been nominated for 3 Grammy Awards.

He is an American former professional boxer who was acclaimed for his defensive strategies and his in-depth knowledge of boxing tactics. He is also the father of dominant boxer Floyd “Money” Mayweather, Jr.

During an interview, Floyd Mayweather Sr. said – “It is a serious disease, man. Sarcoidosis is nothing to play with. It typically attacks men, however, there are the rare occasions where women get it too and it’s tough.”